Seed size is a vital agronomic trait and determinant of crop yield. Increasing seed size would provide an efficient method to raise grain yield and to meet the dietary caloric demands of the growing population worldwide. Accordingly, the regulation of seed size has been extensively studied in plant and crop science.

In the 20th century, scientists discovered that changes in the maternal tissue of Arabidopsis thaliana can affect the final seed size. However, as an important part of seed development, the detailed molecular mechanisms and genetic regulatory networks of how maternal tissue affects grain size are still unclear.

Recently, research group of Professor Xian Sheng Zhang in Shandong Agricultural University, identified Arabidopsis MATERNAL EFFECT EMBRYO ARREST 45 (MEE45) as a B3 transcription factor that controls cell proliferation and maternally regulates seed size through its transcriptional activation of AINTEGUMENTA (ANT) and its downstream control of auxin biosynthesis in the ovule integument. The findings are published online in The Plant Cell, a life science journal published by The American Society of Plant Biologists.

As we all know, seed size is determined by the coordinated development of maternal and zygotic tissues. In angiosperms, the zygotic tissues result from double fertilization, when one male sperm cell fuses with the two female polar nuclei to produce the triploid endosperm, while the other sperm cell combines with the egg to form the diploid embryo. The seed coat is the maternal sporophytic tissue of the seed: it surrounds the embryo and endosperm, and is derived from the integument of the ovule. The integument form the cavity within which the embryo and the endosperm will grow after fertilization, and become the seed coat that sets a physical constraint on final seed size. The diploid embryo, the triploid endosperm, and the maternal integument coordinate their development to determine the final size of the seed. 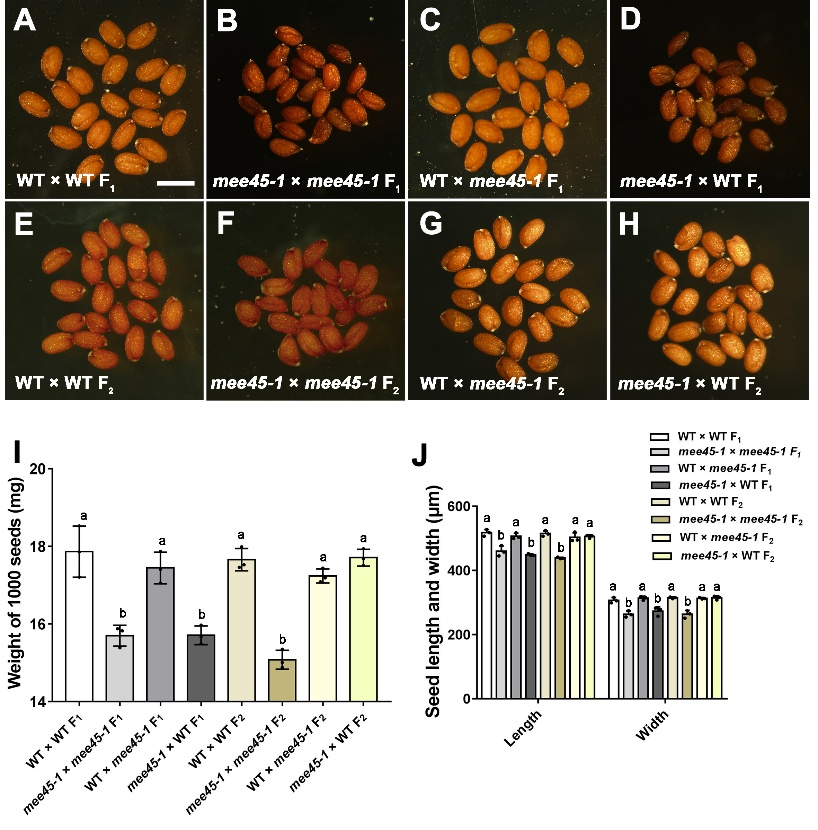 Introduced by Professor Ying Hua Su, the corresponding author of the paper, in the process of investigating the key genes affecting seed size, we found that the seeds of the transcription factor mutant mee45-1 were significantly smaller than those from the wild type, and the seeds were significantly larger after increasing the expression of MEE45 gene. Then we performed reciprocal crossing experiments between mee45 and the wild type, and we only noticed the effects of the mee45 mutation on seed size when maternal plants were homozygous for the mee45-1 mutation. If MEE45 is only expressed in the maternal tissue, it can completely complement the phenotype of the mutant small seeds. However, direct inhibition of MEE45 expression in the next generation of seeds does not affect seed development. So, MEE45 regulates seed size by affecting the maternal tissue. 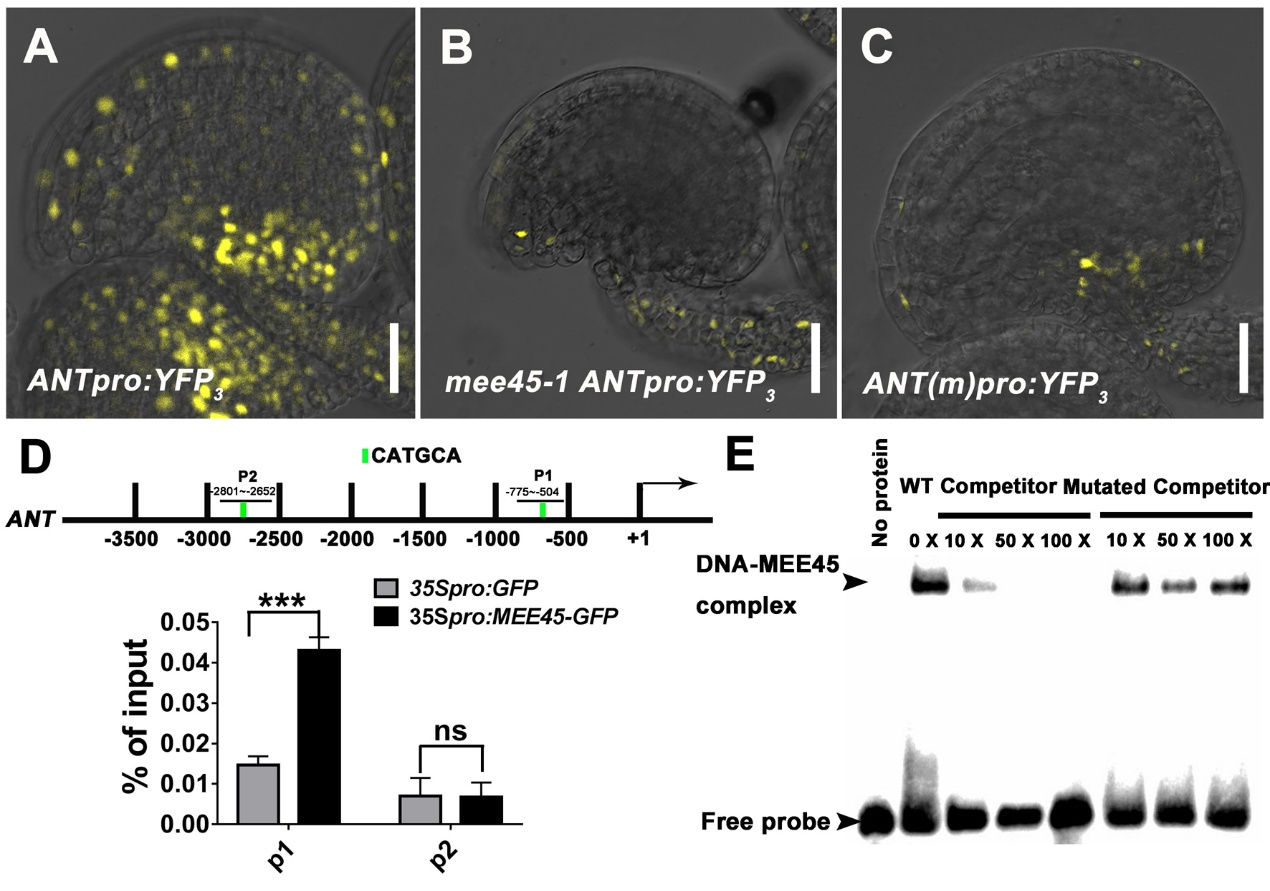 She explained that through the analysis of transcriptome data, we found ANT gene, which can affect the seed size, and through the Fluorescence analysis, ChIP found that MEE45 can bind to the promoter of ANT, affecting the expression level of ANT. Further studies showed that ANT downstream of MEE45 could regulate the expression of YUC4, a key gene in auxin biosynthesis, thus affecting seed size.

In this study, they proposed the genetic pathway and related mechanisms of MEE45 controlling seed size. In the ovule integument, MEE45 positively regulates ANT transcription by directly binding to the ANT promoter region, and ANT in turn directly interacts with the YUC4 promoter to activate YUC4 expression. MEE45 and ANT function in the same genetic pathway to regulate the expression of YUC4, thereby mediating maternal auxin biosynthesis. Auxin biosynthesized in the maternal ovule integument may generate a signal received by embryos or move directly into the embryos to affect their development, and further determines the seed size.

Ying Ju Li and Yang Yu, PhD candidates at Shandong Agricultural University, were the first authors of the paper. Professor Ying Hua Su and Professor Xian Sheng Zhang were the corresponding authors. This research was funded by the National Natural Science Foundation of China (31670320), the Natural Science Foundation of ShandongProvince (ZR2017JL016) and Program for Scientific Research Innovation Team ofYoung Scholar in Colleges and Universities of Shandong Province (2019KJE011).