WUSCHEL(WUS), SHOOTMERISTEMLESS (STM) and CLAVATA3 (CLV3) have been identified as 3 key factors in regulating plant shoot meristem development for more than 20 years. WUS and STM proteins play an important role in regulating CLV3 transcription and stem cell activity maintenance, but the mechanism of how they interact with each other to regulate stem cell fate still remains unclear. 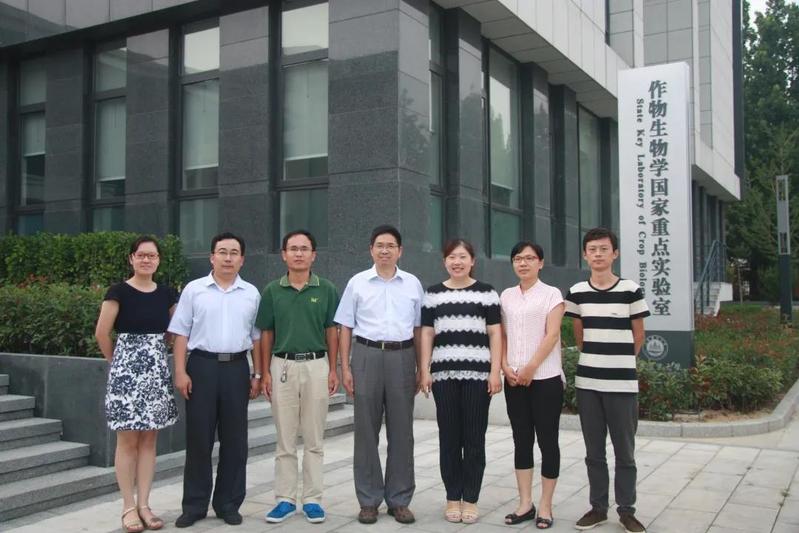 Some members of the team led by Professor Xiansheng Zhang.

The team led by Professor Xiansheng Zhang has revealed the fine interaction pattern among WUS, STM and CLV3 and uncovered the cross and coordination of WUS and STM in mediating stem cell  development and maintenance, which provides a new insight for a further analysis of the regulation mechanism of stem cell activity of plant shoot meristem. This research firstly revealed the interdependent interaction modes between stem cell activation factor and synergistic factor in shoot meristem, which has solved many confusing questions about plant stem cell regulation and filled the gap of the interaction pattern of key factors in stem cell regulation. On 25th August, Beijing time, the internationally renowned academic journal PNAS published this significant research online. 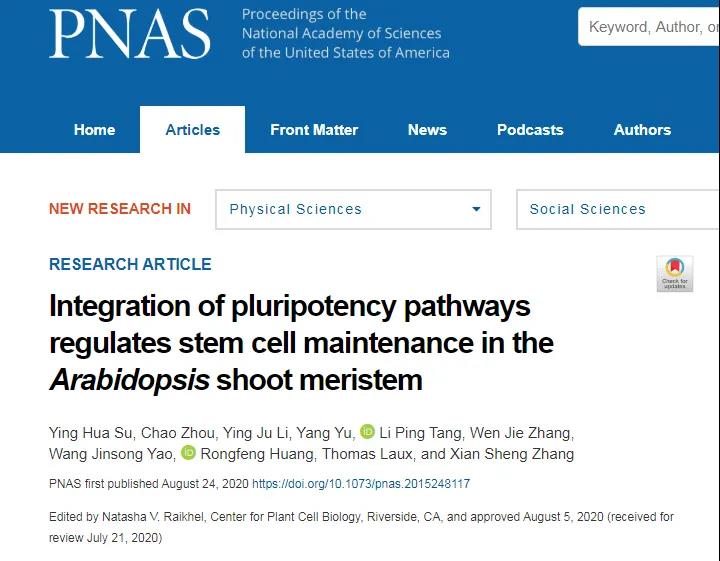 Screenshot of the paper.

Plant stem cells are primitive cells capable of self-renewal and producing various differentiated cells continuously, which locates at the meristem and cambium of root and shoot, keeping pluripotency during the entire life cycle and controlling their growth and development. Plant shoot stem cells, which are origins of cells of all aboveground organs, determine the differentiation and development of such aboveground organs as stems, leaves, flowers and fruits, thus the research on their regulation mechanism plays an important role in uncovering the differentiation mechanism of plant organs. 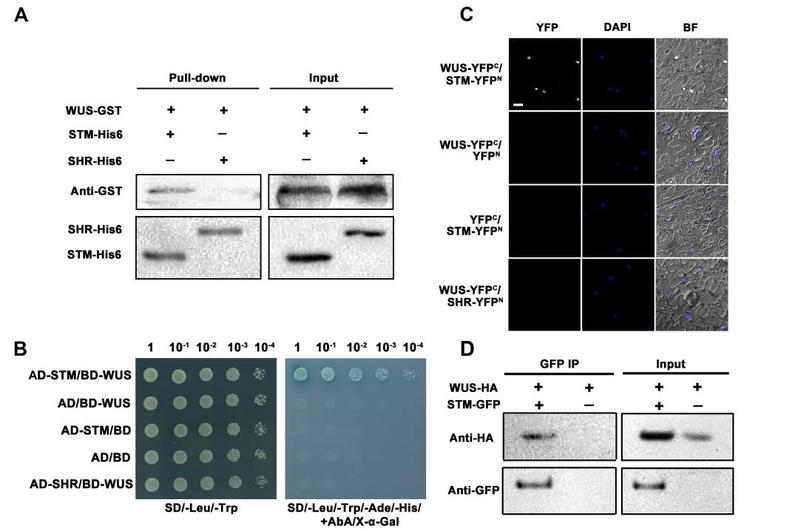 Direct interaction between WUS and STM in vitro and in vivo. 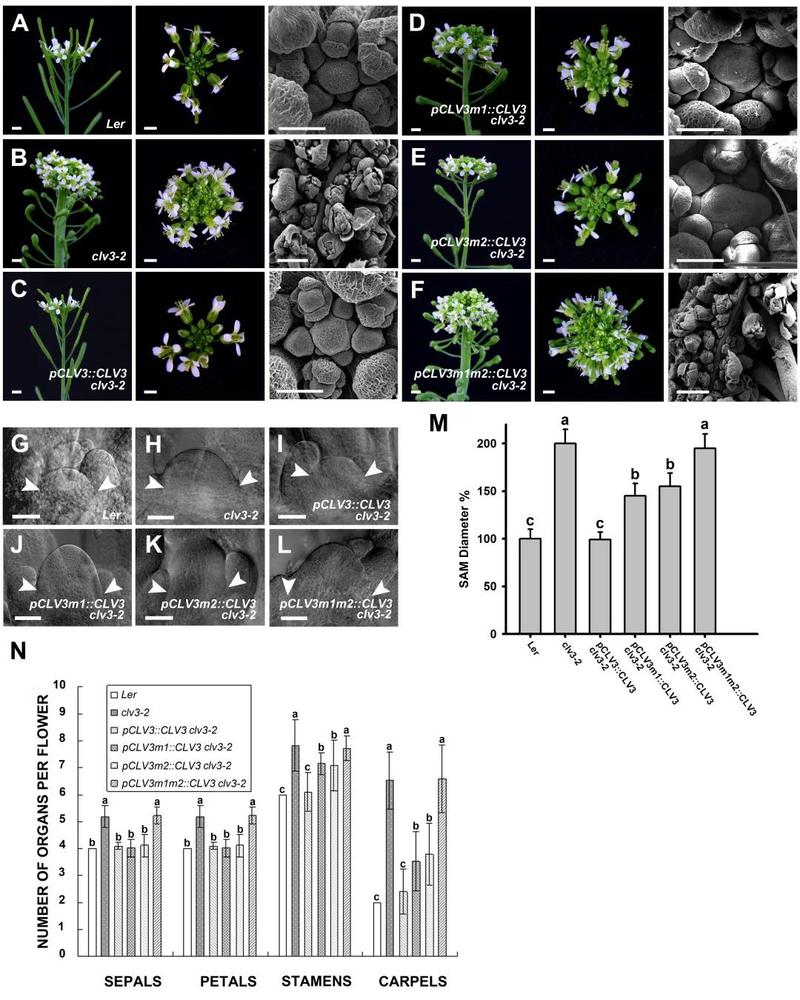 WUS protein was reported as the most crucial regulation factor in regulating plant shoot stem cells for the first time in 1998, its function and regulation mechanism has been a hot topic in the field of plant stem cells. Since 2002, there are less and less researches on how WUS interacts with other factors to form regulation networks and activate and maintain stem cell activity. To further analyze the WUS mediated regulation pathways and mechanism, the team led by Professor Xiansheng Zhang has been engaged in screening the direct mutual proteins interacting with WUS since 2011 and used the then latest CO-IP assay in the hope of identifying new WUS interaction factors as well as their mediated genetic pathways and molecular mechanism of regulating shoot stem cell activity. After years of strenuous work, the team optimized many methods of fine acquisition of shoot meristem cells and WUS protein extraction and purifying, acquired relatively stable labeled WUS protein, and finally screened dozens of factors that might interact with WUS protein among which STM protein was identified. 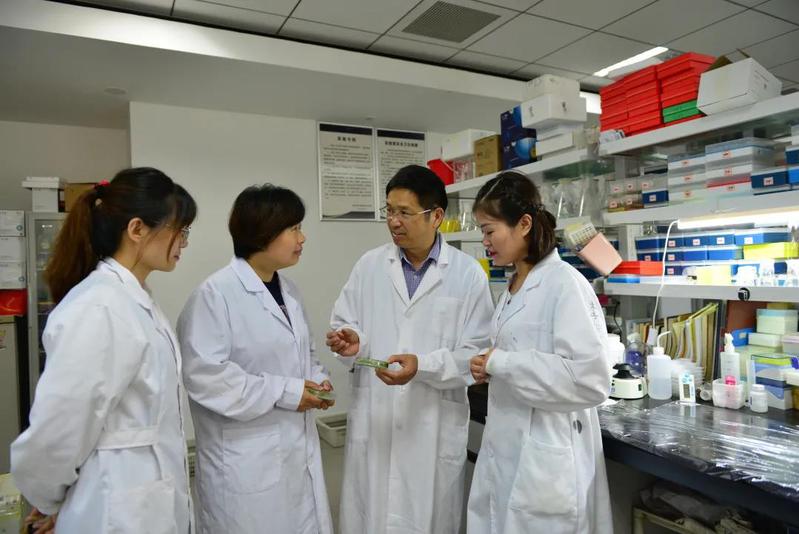 Professor Xiansheng Zhang  (the second on the right) instructs some team members to discuss the fine acquisition method of stem tissue from WUS marker plants.

The STM protein was firstly reported in 1996. As a key activation and maintenance factor of stem cells, it has the main functions of maintaining the undifferentiated state of stem cells and preventing these cells from differentiating into various organs. According to most researches, the STM mediated stem cell regulation pathway is independent from or complementary to the WUS mediated one. However, there has never been any report on the direct interaction between STM and WUS. Based on the clues provided by the preliminary interaction experiment results, the team used various genetic and biochemical experiments to prove the mechanism of STM functioning as WUS interacting protein. 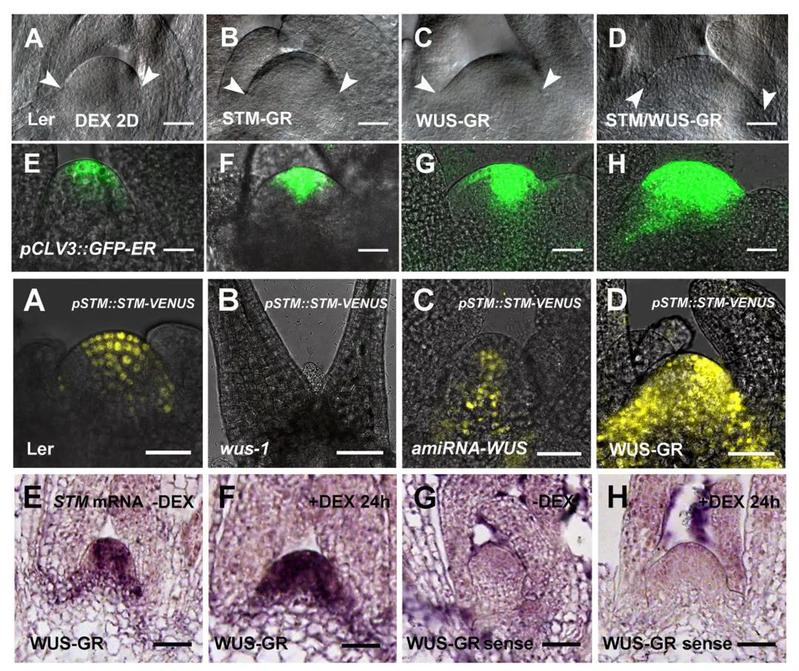 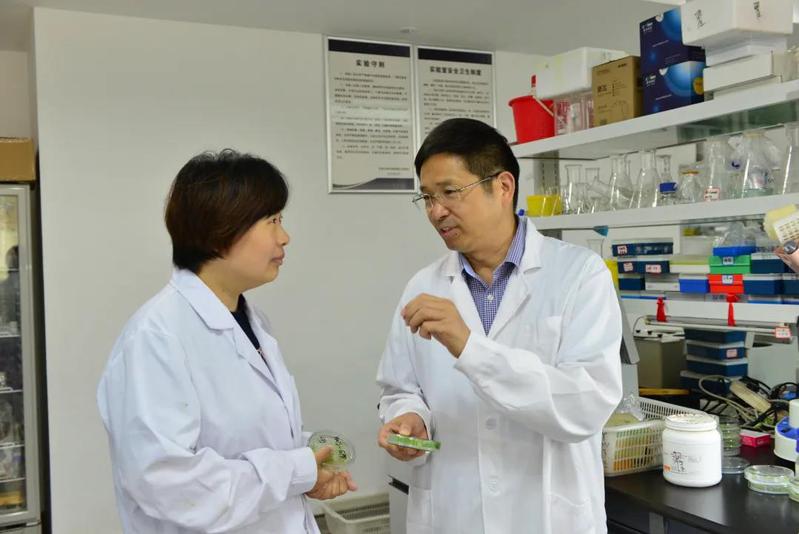 According to Professor Xiansheng Zhang, the team leader and correspondence author, the research on plant stem cells is not only a core research proposition in plant developmental biology, but also an important foundation in industrialization of molecular genetic improvement of crops and plant biotechnology. The fine interaction pattern among the 3 key factors in this research has special significance for realizing the dynamic equilibrium of stem cells in shoot meristem. It provides a new theory on development regulation of shoot stem cells, that is, the pluripotent stem cell regulation factor forms a fine regulating unit for regulating stem cell homeostasis in shoot meristem. The theory uncovers the function of interdependency between activation factor and synergism factor at molecular level and provides a new insight into the complex regulation mechanism of plant stem cells.

The regulation network between WUS, STM and CLV3 in shoot meristem

The research reveals the molecular regulation mechanism of plant stem cells profoundly and clarifies the plant regeneration mechanism fundamentally. In other words, the differentiation and development of vegetative organs of crops as well as the differentiation number of floral organs can be increased by improving the expression level of activation factor in crop shoot stem cells, enhancing shoot stem cell activity and increasing the number of shoot meristem stem cells, thus more branches will be formed and more seeds will be obtained. The research achievements are expected to be applied on corn, wheat and other field crops. It will have a great importance in accelerating the rapid propagation of crops, improving the regeneration ability of crops and crop yield significantly and other aspects. Meanwhile, the industrialization development of agricultural biotechnology will also be pushed forward.